Ah-6d planning was a critical part of each mission. The racetrack patterns and running fire tactics we utilized were necessary due to insufficient power to hover and to increase our own survivability. While en route to Khowst, we crossed a snow-covered mountain at 11, MSL.

Each mission required performance planning for altitudes, temperatures, and gross weights that were much higher than we normally operate. We knew that it would not be long before power was a luxury that we would not have.

During the winter months at Kandahar, our aircraft performed well. We had already conducted numerous missions to include Operation Wh-64d. A valuable lesson learned from this deployment is that units should focus early on power management issues and train accordingly so that they are prepared when deployed.

We quickly learned that power management was a skill necessary to survive our deployment. We adapted to this environment well, but were fortunate to have a wealth of experienced aviators in our company. The terrain is relatively flat with rolling sand dunes 10 miles west and a mountain range approximately 15 miles to the north. This cell always contained at least one of the unit instructor pilots.

We arrived in Afghanistan near the end of January and were based out of Kandahar International Airport. By the end of April, the temperature at Kandahar was nearing degrees Fahrenheit. 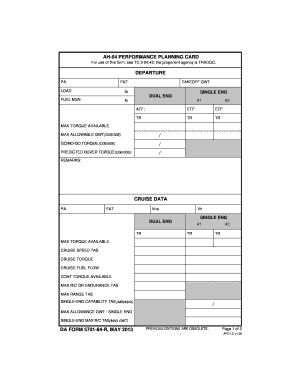 Our first mission took us from Kandahar to Bagram Airbase to refuel and then on to the eastern city ah-64e Khowst. On a daily basis, we had power available to hover out of ground effect OGE.

During the deployment, we were exposed to a wide range of temperatures, a variety of flight environments, and altitude extremes that we had never operated in before. Within three weeks of our arrival, our missions started taking us to higher and higher altitudes. Kandahar is approximately 3, feet mean sea level MSL and can be characterized as high desert. I slowly increased the power until I drooped the rotor and then decreased the collective. During our missions in Afghanistan, we had two aviators assigned to our performance-planning cell.